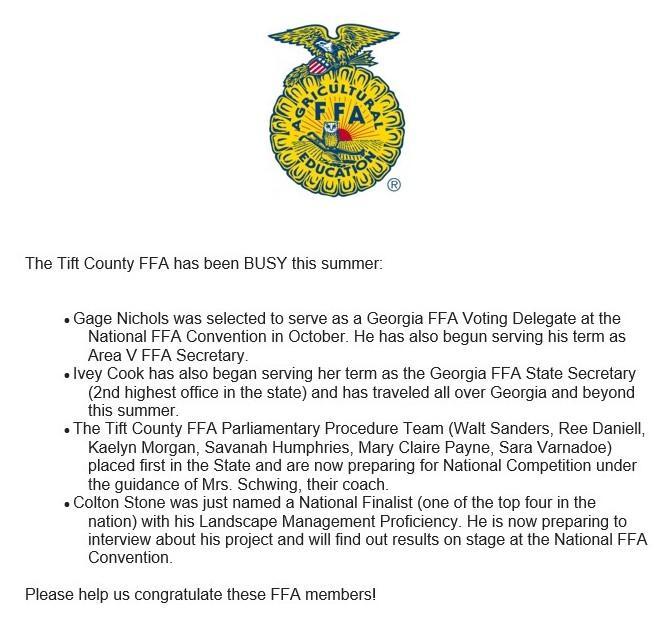 2017 - 2018 FFA
Congratulations to the Tift County FFA Ag Communications team, who placed 5th in their Preliminary Round this past weekend (March 24, 2018):
Anna Bowen
Ivey Cook
Kaylie Roberts
Meagan Taylor (5th High Individual in round)
The following FFA members have been announced as receiving their State FFA Degree, the highest degree awarded a high school member. To qualify, these members had to have an ACTIVE Supervised Agricultural Experience project during which they invested/earned at least $1000 and/or worked 300 hours, completed at least 25 hours of community service in at least 2 different activities, and competed/participated in at least 5 FFA activities above the local level. Please, congratulate these members who will have the opportunity to receive these awards on stage at the 2018 Georgia State FFA Convention.
April Carroll
Anna Connell
Daniel Cordova
Christian Dotson
Caley Driggers
Brooke Fincher
Bryce Gilder
Hardy Goodman
Alana Hardy
Claire Lawson
Sara Beth Massey
Samantha Matthews
Danielle Miller
Lou Morris
Breon Nichols
Luke Potts
Diana Reyes
Carter Ring
Jacob Roberson
Nicholas Spader
Nathan Stainback
Cody Waldschlager
The following FFA members took their SAEs to the ultimate level and have won 1st place in South Region Proficiencies. They will be interviewing at the 2018 State FFA Convention and find out on stage if they won.
April Carroll (Ag Mechanics Design & Fabrication)
Breon Nichols (Food Science & Technology)
Carter Ring (Turf Grass Management)
Nathan Stainback (Lawn Care Maintenance)
Cody Waldschlager (Equine Science)
Caley Driggers was awarded the South Region Star Farmer and will be interviewed by a State FFA panel on 4/9/2018 at her farm where she will have one hour to tour the judges and answer questions. Caley will be honored on stage at the State FFA Convention along with her parents and Advisors. A film of her SAE will be shown to the convention hall, and she will find out on stage whether she is the Georgia State FFA Star Farmer. 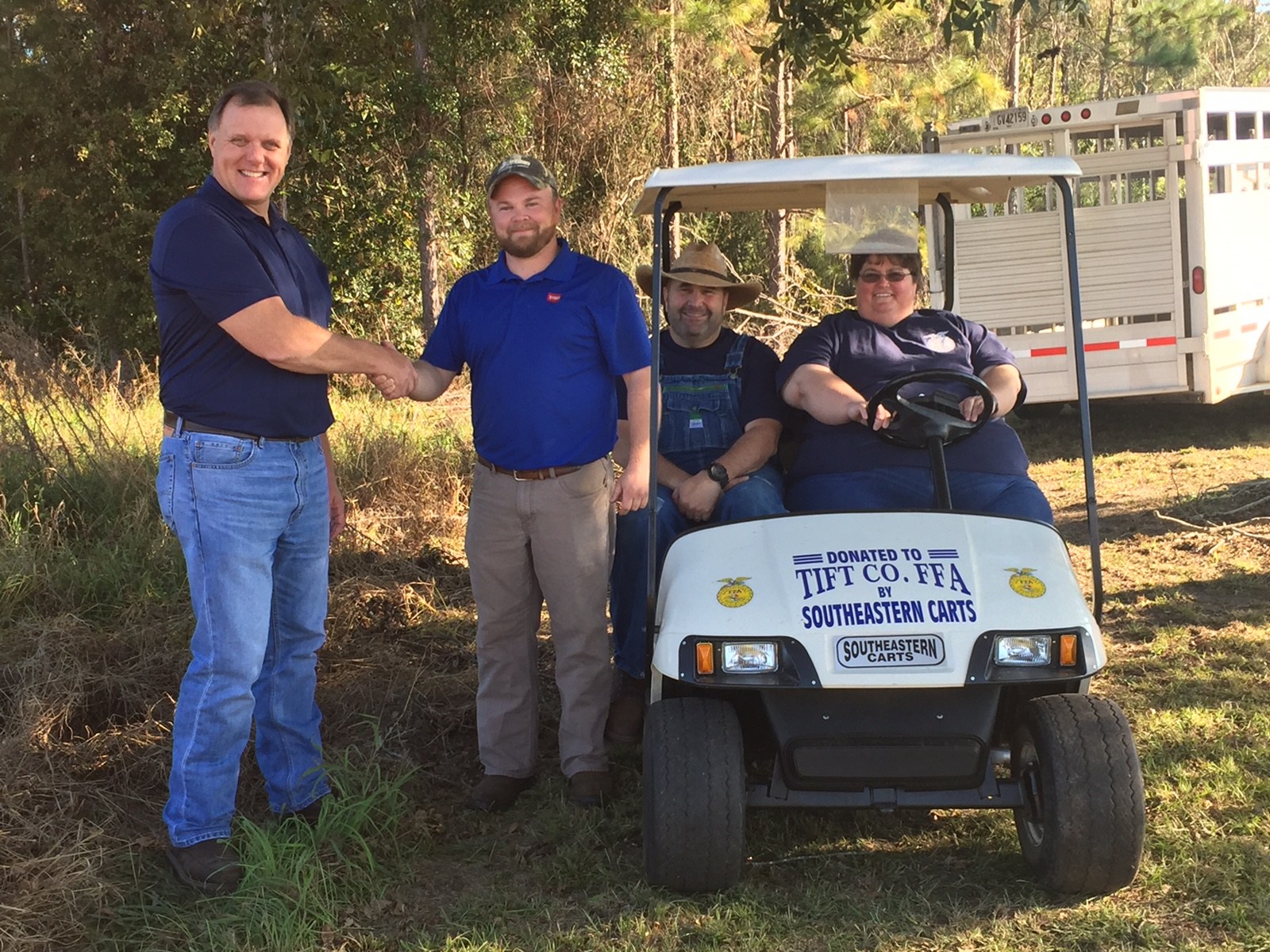 Jeffery McClendon of Southeastern Carts made a huge donation to the Tift County FFA program recently. Mr. McClendon donated a golf cart to the FFA for their use with different activities they are involved in throughout the year. McClendon said, “This donation was my way of giving back to them (FFA program).”

Lynne Cook, AES Academy teacher and FFA co-Advisor said, “We will be using the golf cart for a variety of activities, livestock shows, Children’s Farm Day, etc.”  McClendon is a former student in the Tift County Agricultural & Environmental Sciences Career Academy and was also a Tift County FFA member during his high school career.  McClendon has made several donations to the FFA program in support of the program and all they do. Cook stated that she and all the people involved are very appreciative of McClendon’s donation saying, “He just does it to help us out of the goodness of his heart.”

Ian Bennett, a member of the Lowndes County FFA chapter, was elected to serve as the 2017-2018 National FFA Southern Region Vice President. Bennett will take a one year leave of absence from the University of Georgia, where he is a junior studying Agriscience & Environmental Systems, to travel more than 100,000 miles across the United States and to Japan serving as an ambassador for agricultural education and the FFA. Bennett is the 17th Georgian to serve as a National FFA Officer. His agricultural education teachers are Dr. James Corbett and Mr. Quinton Hadsock; and he is the son of Marshall and Marybeth Bennett of Valdosta.


The West Jackson Middle School FFA chapter was named the nation’s Outstanding Middle School chapter as part of the National Chapter Award program. West Jackson Middle was one of five national finalists for the award, including Franklin County Middle, Jefferson Middle, and Northeast Tift all of Georgia. Each finalist chapter had two students make a presentation explaining their chapter’s activities in the Growing Leaders, Building Communities, and Strengthening Agriculture portions of the FFA Program of Activities. The agricultural education teacher and FFA Advisor at West Jackson Middle is Mrs. April Davis.

Only four students from across the nation are named National Finalists in each of the 47 proficiency areas. Georgia had a total of 20 national proficiency award finalists.

One hundred and thirty two Georgia FFA members received the prestigious American FFA Degree, the highest degree offered to an active FFA member. These students spent years developing their Supervised Agricultural Experience (SAE) programs to reach this honor. This is the largest class of American Degree recipients in the history of Georgia FFA.


The Georgia FFA Association was recognized as a membership growth state. This marks the 19th consecutive year that the Georgia FFA has increased in FFA membership. Georgia was represented in Indianapolis by 25 official voting delegates, and more than 1,500 local FFA members, advisors and Alumni from across the state.

2018-2019
We had an incredible weekend at the State FFA Convention this weekend, and we wanted to share so that you all can congratulate your students on a job well done.
Lauren Lindsey placed 2nd in her Ag Sales Proficiency.
Ree Daniell placed 2nd in her Fiber/Oil Crop Production Proficiency.
Sam Chambers placed 1st in his Turf Grass Production Proficiency and will be moving on to Nationals.
Sam Hudson placed 3rd in his Wildlife Management Proficiency.
Colton Stone placed 1st in his Landscape Management Proficiency and will be moving on to Nationals.
Deanna Parten placed 3rd in her Agricultural Education proficiency.
Ethan Hester placed 3rd in his Environmental Science and Natural Resources proficiency.
Mary Claire Payne placed 3rd in her Diversified Agriculture proficiency.
Alexis Mccaffity placed 3rd in her Small Animal Production and Care proficiency.
Walt Sanders placed 3rd in his Agricultural Mechanics Design and Fabrication proficiency.
Deanna Parten performed a beautiful rendition of "Say Something" with her ukelele. You can watch her performance on this link.
https://livestream.com/accounts/18414984/events/8638176/videos/190523324
Ree Daniell was chosen by the State Officer team to introduce them at the 5th session. You can watch that here beginning at 5:20.
https://livestream.com/accounts/18414984/events/8638176/videos/190523324
Erynn Allison did an amazing job presenting her speech on the importance of prescribed burns. She went over on her time just a little and missed going into the final four. Next year!
John Aultman missed going into the final four by 1 point! This was his first year competing and he competed against seniors! We are excited to see him excel in this CDE next year!
Ms. Cook was honored on Friday night for her influence as a female in Agricultural Education. You can watch that presentation here beginning at 45:05.
https://livestream.com/accounts/18414984/events/8638176/videos/190523324
Our Parliamentary Procedure Team met a goal that they have strived after for 4 years. They WON the State Parliamentary Procedure CDE!! In the world of FFA, this is the equivalent of winning a State football championship. If you need a good cry, watch the reactions of our students when they won in this clip beginning at 1:28:00.
https://livestream.com/accounts/18414984/events/8638176/videos/190523324
The team members were:
Walt Sanders
Kaelyn Morgan
Sara Varnadoe
Ree Daniell
Savannah Humphries
Mary Claire Payne
The grand finale to the best state convention ever was Ivey Cook being elected to serve as the State FFA Secretary on the 2019-2020 State FFA Officer Team. There are just no words to describe the pure elation that was experienced by Ivey and our entire chapter when they announced her name! I have attached a clip to give you a glimpse https://www.facebook.com/andy.e.harrison.5/videos/10217183838175711/
Thank you again for ALL that you have done this year to support these students. You made it possible for these students to experience the success that comes from hard work. As FFA Advisors, we live for these moments with our students because we know that these are the moments that they will remember. 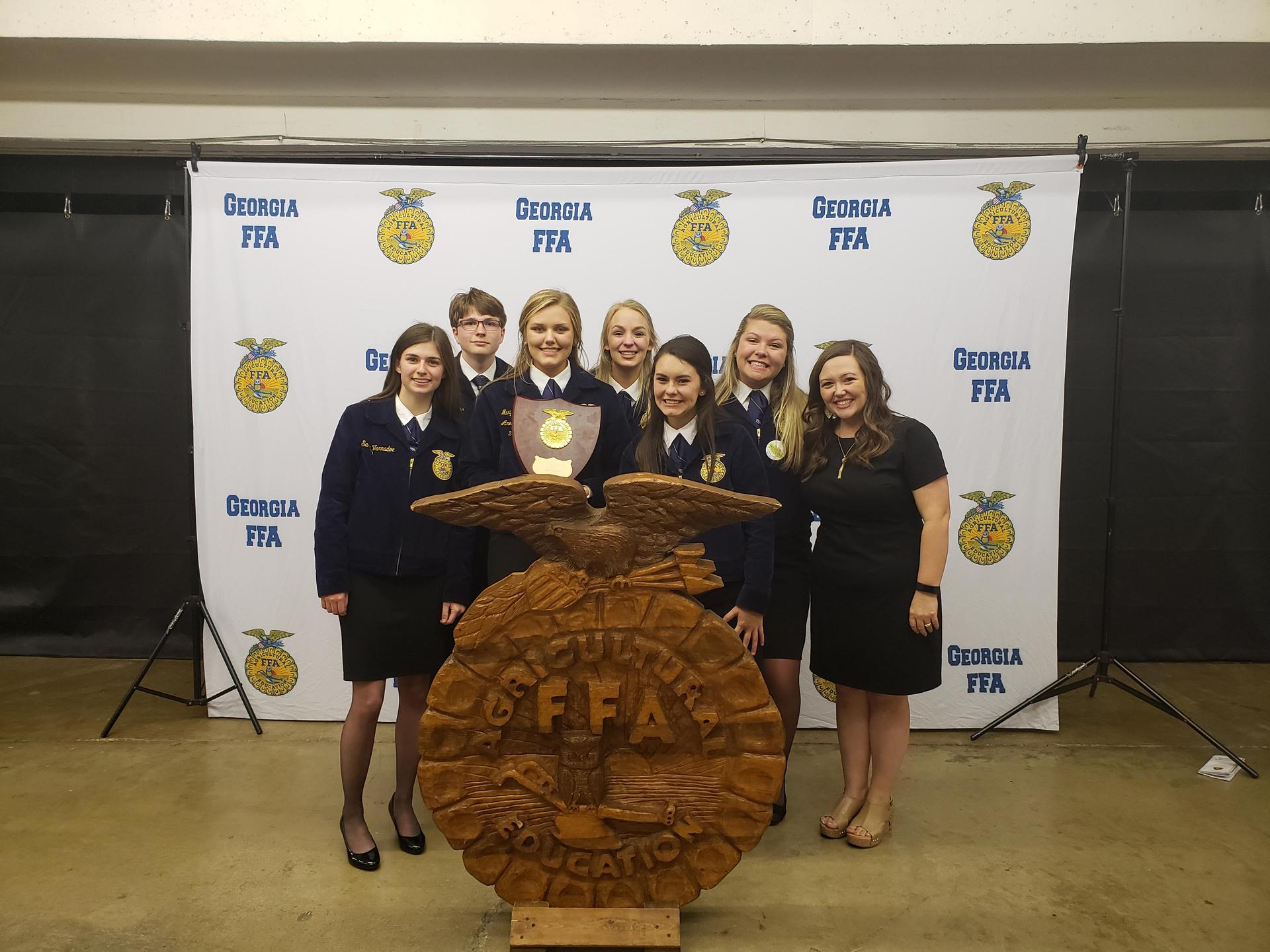 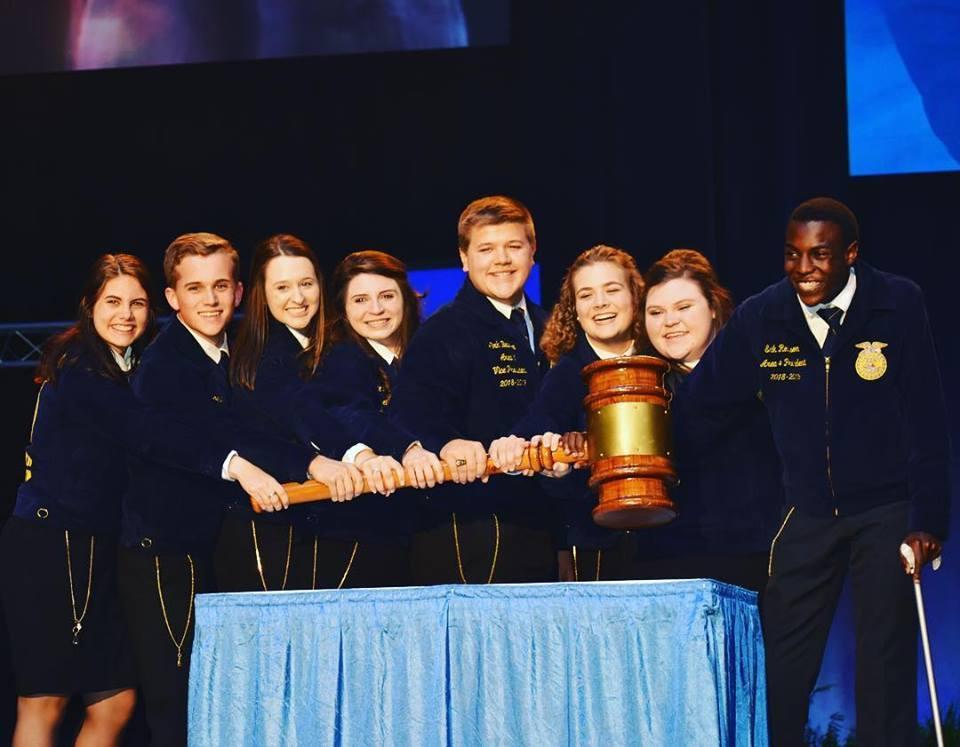 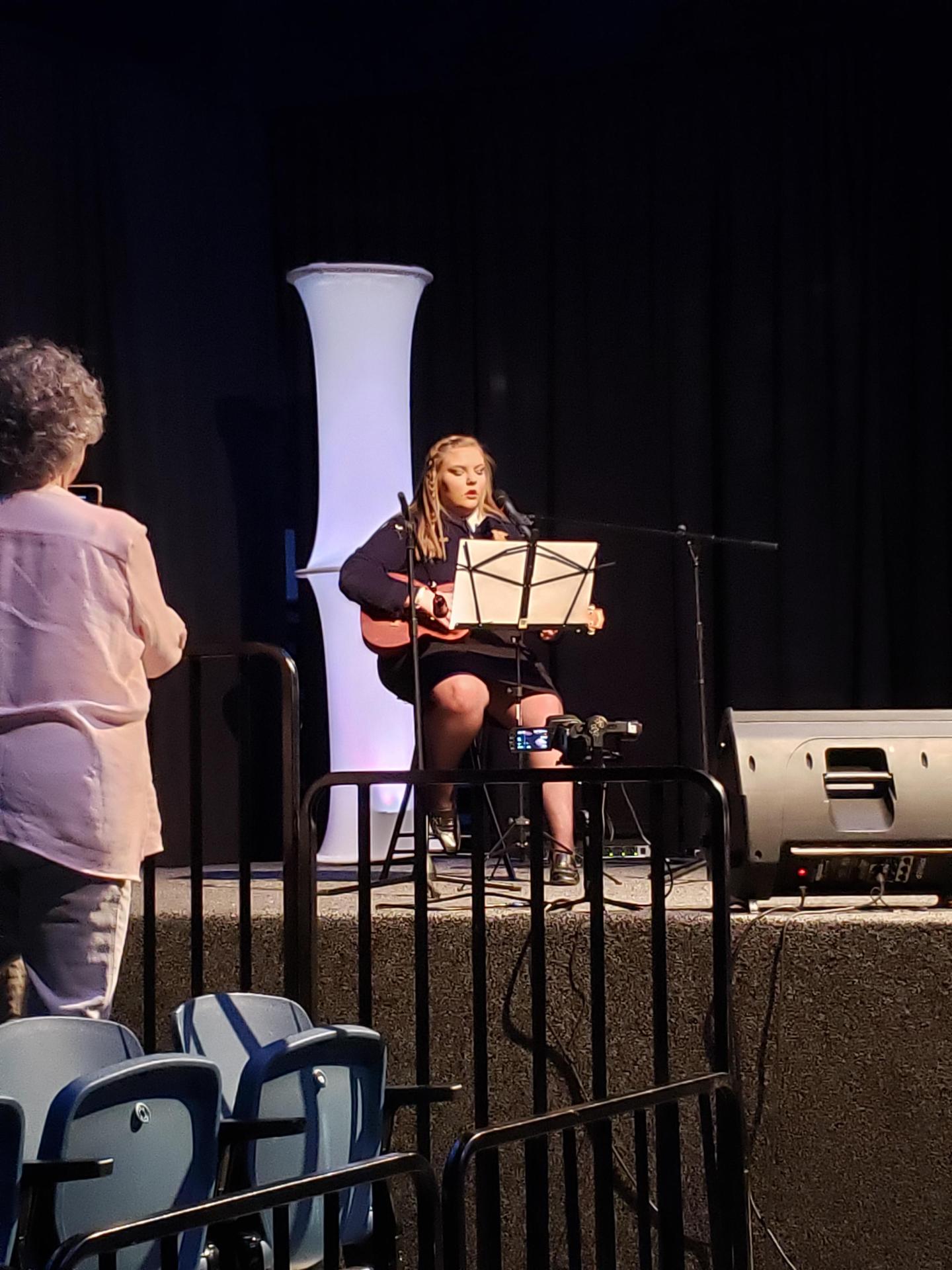