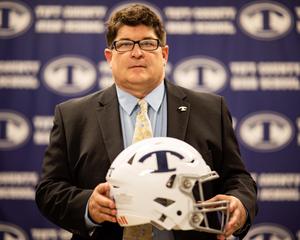 During a special called Board of Education meeting on January 26th, Noel Dean was named the head football coach for the 2020-2021 school year. We would like to welcome Coach Dean to the Blue Devil Family! #4theT

During a special called Board of Education meeting on January 26th, Noel Dean was named the head football coach for the 2020-2021 school year.


“We are happy to welcome Coach Dean to the Blue Devil Nation,” said Superintendent Adam Hathaway.  “Our process led us to one of the most successful high school football coaches in the country. Coach Dean has a long history of success as a head coach, leader, and member of his local community. We couldn’t be more excited to add a coach of his caliber to our athletic program and the faculty at Tift County High School.”


Dean began his coaching career in 1991 at Bendle (Mich.) High School. During his time there, he led the school to it’s first ever playoff appearance and was named MHSFCA Regional Coach of the Year in 1995, a year in which his team made it to the semi-finals. Dean left Bendle in 1996 and became the head coach at Lowell High School. Dean’s record boasts over 245 wins, 3 State Championships, 3 state runner-ups, 9 semi-final appearances, 9 regional titles and 13 district titles. Dean’s teams have been recognized fourteen times for being Academic All-State and four times for being the top Community Service program.


Dean’s 2004 Lowell Red Arrows team was named #14 in the top 25 teams of the last 25 years by State Champs Sports Network in their coverage areas of Michigan and Indiana. The 2004 Lowell football team won the Division 3 State Championship, allowing only 3 regular season teams to score, totaling 36 points given up during the season.  The 2004 Lowell team outscored their opponents by 575 points, an average of 41 points a game.  They won their 5 postseason games by 35 points a game.


Dean was awarded the American Football Coaches Association 2011 Power of Influence Award.  The Power of Influence award was created as a way for the AFCA and AFCF to honor a deserving high school football coach. Coaches who receive this award are recognized for their impact on their team and players, as well as the legacy they leave with the school and community. This award is not based on wins and losses; however, it is noted that coaches of powerful influence have longevity and success. It is the first AFCA award specifically designed to honor a high school coach.


Dean is also a believer in building a complete community experience for the student athletes he leads.  In 2008, Dean started the Pink Arrow Pride game at Lowell High School.  The game turned into a movement that saw multiple sports rally to raise money for cancer survivors and families in the Lowell, Michigan area.  To date, the Pink Arrow Pride program has raised over $2 million dollars for the community.


“Coach Dean understands hard work, success, and what it means to be a Blue Devil,” TCHS principal Chad Stone noted. “I am eager to see him work with our student athletes and develop a football program that makes us better today than yesterday.”